Among us polus map 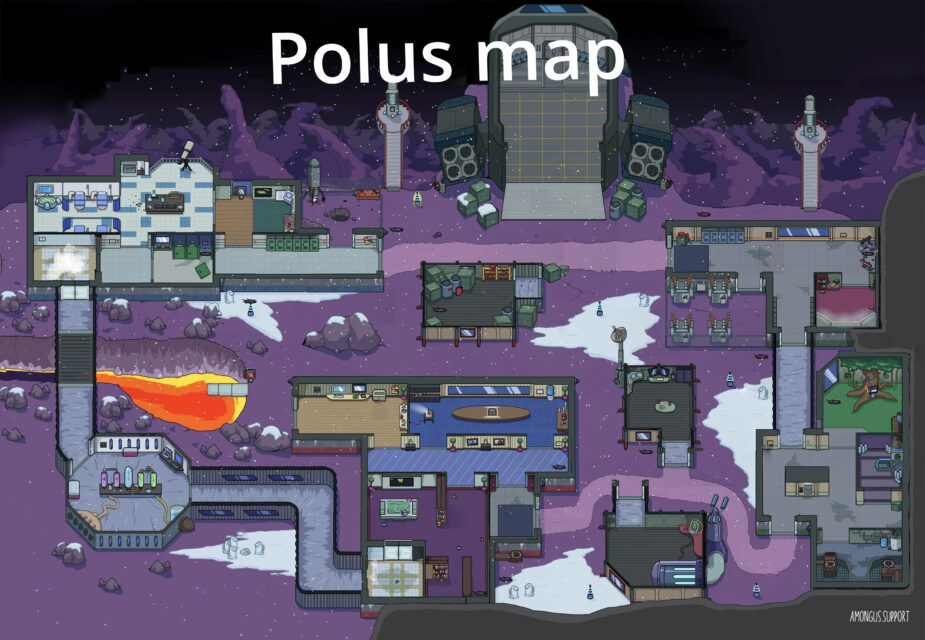 Polus is the third card in Among Us, which is the base on the planet of the same name.

The game begins with the crew landing on the planet in a landing capsule. The emergency meeting button and the meetings themselves are held in the office, and possible traitors are thrown into the lava.
Security system

There are three systems on this map that allow you to track the movements and condition of crew members: cameras, the captain’s bridge and “vital signs”. All systems are disabled when the communication module is sabotaged.

Vital signs are located in the office. The monitor displays the current status of all players:

Player statuses are updated instantly. This can be used to calculate a possible self-report.

The cameras are located in the guards, and any player can watch them; if someone is watching them, they will flash (if the player is not a ghost). At the same time, unlike the “The Skeld” map, here you can view only one location, and not all at the same time.

Despite the fact that instead of ventilation, holes are used on this map, they work in the same way as on other maps. There are eleven pits in total:

In o2 (in the location with a tree)<-> in electricity (near the guard)<-> at the corner of electricity (on the street); (Path A)
At the corner of the link<-> on the left side of the office<-> in the vault; (Path B) (I do not advise anyone to use “Path B”, since all the pits entering it are traced (two of them are windows, one (in the office) camera) and you will not see if this camera is active or not, because it is behind the wall.)
Behind the wall in the street<-> At the bottom of the office<-> at the corner of the laboratory (below)<-> in the toilet; (Path C)
The landing capsule on the left<-> the landing capsule on the right. (Path Z)

The traitor can sabotage three systems of the base.

He can also close the doors to the rooms, but, unlike The Skeld, the crew members must open them themselves.
Seismic stabilizers
Reactor repair

When seismic stabilizers are sabotaged, 60 seconds are given to reset. If the crew does not manage to do this, the game will end with the victory of the traitor.

As in the case of sabotaging the reactor, two players must simultaneously place their hands on the corresponding panels (top left and right, respectively).
Electricity
Electricity sabotage

When sabotaging the electricity, the field of view of the crew members (but not the traitor) is significantly reduced. At the same time, there is no time limit for repairs.

To repair this sabotage, players must move all levers in the electrical board to the on position (so that the lights are on). If there are too many players trying to fix it at the same time, the process can be significantly delayed.
Communication module
Repair of communications

When the communication module is sabotaged, the entire security system is completely disabled, the list and location of tasks on the map become unavailable.

To fix this sabotage, you need to find the correct position of the tuning knob, when the voice of the announcer can be heard without interference. Also, if the position is correct, the red light will go out.

This planet is quite similar to the planet Lola-Sayu from the Star Wars franchise.
Despite the fact that the reactor is not visible on the map, the tasks associated with it are still present.
The seismic stabilizer sabotage icon uses the same icon as the reactor.
If Exile Role Reveal is enabled, traitors will show thumbs up before drowning in the lava completely. This is a reference to the movie Terminator 2: Judgment Day. If a crew member has been banished, they will show their palm, asking for help.
THSC has a character named Polyus Petrovich. His biography says that he won the lottery and named the planet after his name – Polyus.