Space “Mafia”. Among Us gameplay 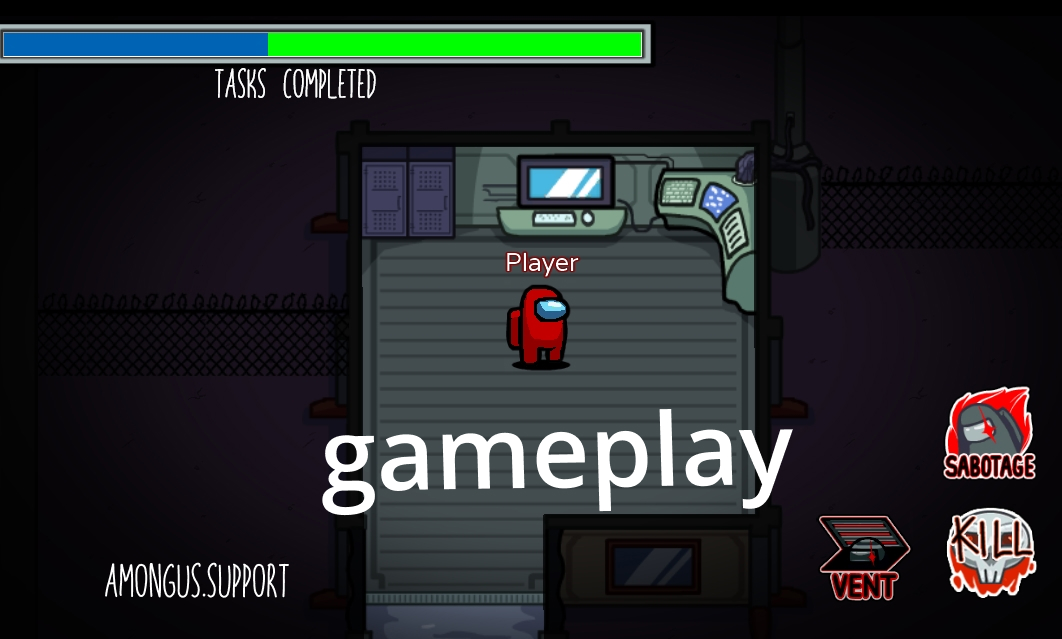 Wait, is this our life a computer game? And it has always been that way. The well-known meme has now become a social computer game, where the player can be in two roles: an astronaut rescuing the ship, and with it the rest of the crew, or an astronaut infected with an alien creature and obsessed with the thirst for murder.

An interstellar spacecraft is returning home from a dangerous interstellar journey. And everything would be fine if part of the team were not infected with alien brain parasites. Alien saboteurs will sow death, chaos and panic on the ship. Who will stand in this confrontation?
The plot familiar from many science fiction books, films and games will sparkle with new colors when you find yourself in this game, because Among Us is not an action movie, but a real psychological thriller. In this case, the plot will be developed by all members of the crew of this multiplayer online game, and you will type the scenario of the game yourself on the keyboard.

The most fun part of the game is the gameplay. If you have ever played the Mafia board game, then in general, you can assume that the game mechanics are familiar to you, although the mechanics in Among Us have migrated a little truncated and changed. As in the mafia, the gameplay depends on the role that you have in the game. In total, 10 cosmonauts participate in the party, among whom there may be from one to three cosmonauts-saboteurs (Impostor, an impostor translated from English, a film with this name in our box office was called “The Alien”).

The task of peaceful astronauts is to put the spaceship in order, eliminating all the consequences of sabotage. Each peaceful cosmonaut has a ship map with indicated breakdowns that need to be fixed. Elimination of the consequences of sabotage is either mini-games (shoot 20 asteroids, connect broken cables by colors, repeat the code in the reactor computer), or just a small task, like downloading / uploading files or opening a garbage gate, in which the player’s participation is minimal.
There is not much fun in these tasks, but their implementation is necessary for another. While performing these tasks it is necessary to keep an eye on the other participants of the “race” and their actions. Is the astronaut in the red spacesuit doing the tasks? He ran away from the terminal, and the progress bar did not even flinch, why? Why is this guy in yellow constantly trying to follow me?

If possible, you should avoid staying in a room with someone else if you are not sure about him. And carefully monitor the surrounding space. There was an act of sabotage in the reactor compartment and all the doors on the ship were blocked? Who will leave the compartment when the doors are closed? Astronaut corpse found? Who has been in this room recently? And if you figured out the suspect, then you need to assemble an emergency meeting of the team in order to bring the villain to clean water, or rather, into outer space.

The most exciting part of the game is the discussion of the suspects at the general meeting in the chat. A too active peaceful astronaut who insists on accusing someone from the team may himself be suspected of sabotage and double play. A saboteur accused of a crime may try to turn the arrows on a peaceful player, and this often happens. At a general meeting, everything depends solely on your skill to be truthful or to lie truthfully.

At a general meeting, if you are peaceful, try to remember where, whom and when you separated from your, for now, comrades. Join the discussion of the actions of other players, share your thoughts on the action of this or that astronaut. If you are sure that someone is a peaceful astronaut, do not hesitate to say so.

If you are a saboteur, act on the principle of “divide and conquer”, remember: you are less. And even if you are caught at the scene of a crime, then try to “get away” from the accusations, and if this does not work, try to transfer the arrows from your criminal comrades to the most astute civilian, accusing him of being the same traitor as you , and that he should take a walk into the lock immediately after you.

Actually, the whole game is revealed only in the chat at these meetings. The sadder is that some users who create hosts for gamingsessions severely limit the time of chats, which does not allow a full meeting and discussion of the behavior of all fellow astronauts. And this plays into the hands of the saboteurs.
Sometimes it is impossible to directly accuse a player of an act of sabotage, but after discussing his behavior with other players, even without having direct evidence, using several indirect evidence the saboteur can be calculated and taken out of the game. And I had such examples during the game. Therefore, it is impossible to neglect the chat during the general meeting, but in it, in fact, is the whole point of this game. And if you are lucky enough to get into a team with experienced players and a well-tuned gaming session, then playing a dozen games in such a company is a great pleasure.

In the Russian-speaking segment, unfortunately, this is much less common than in the English-speaking one. Yes, the game supports local play. But why play locally in Among Us, if you can play Mafia without smartphones, chatting live?

The player who is thrown into the airlock remains in the game session in the form of a ghost, where he can communicate with other ghosts in chat, or a ghost to fly and repair the ship, playing mini-games. This will not affect the repair of a real ship, but it will pass the time while waiting for a new session.

What’s in the bottom line? Desktop “mafia” in a new guise and always with you. Interesting gameplay, provided that you find yourself surrounded by the same enthusiastic players. I definitely recommend it. Good luck.

Vs
Some technical roughness